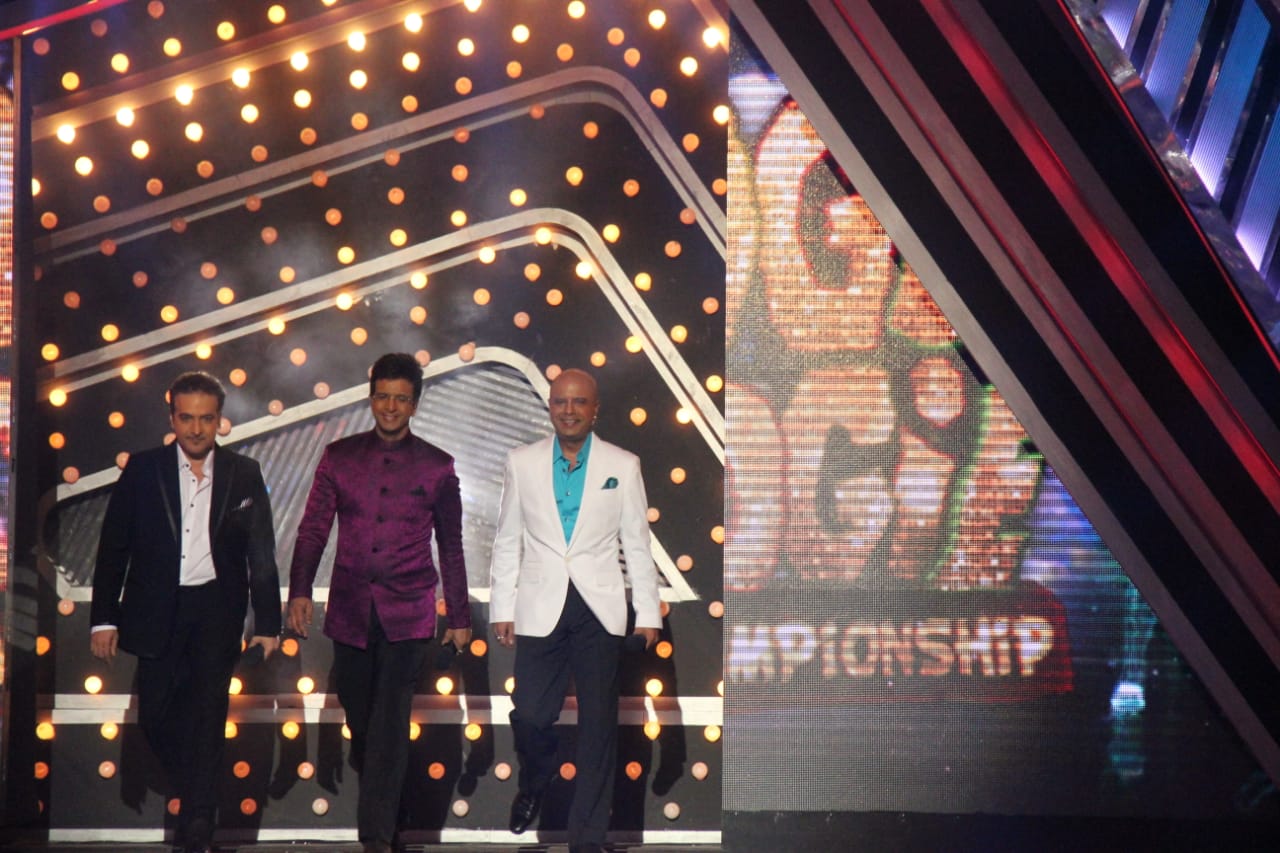 This is going to be super interesting Story full of amazing facts that you would definitely read for the first time ever.

The passion & love with which the show was created by the Ravi and Naved and broadcasted by Sony year after year received the well deserving response.

Lets dig deep into the lives of Boogie Woogie and their passionate creators Ravi Behl, Naved Jaffery and Jaaved Jaffery.

The facts behind the dancing duo Ravi & Naved:

Ravi Behl who is childhood friend of Naved joined him in the journey of making this beautiful show that entire India would wait. Ravi was a known Actor who was popular for his Dance styles especially the one that he performed in the movie ‘Narsimha’.

Naved started with Ads and Ravi with Films:

Naved was passionate about Ad Film making and he worked with Prahlad Kakkar as assistant in many Ads, his favourite being the ‘Gold Spot’ Ads.

He also produced his father’s 1988 famous movie ‘Soorma Bhopali’ which was directed by his father-the very famous Actor Jagdeep who is known for his comedy in Bollywood.

Ravi on the other hand stepped into the world of Bollywood as an Actor. His first movie was ‘Morcha’ after Director Ravikant Nagaich spotted him doing Karate. It’s a coincidence that Naved’s father Jagdeep was also there in the movie. Ravi was just 14 years old when Morcha was released in 1980.

Ravi got his big break in the movie ‘Narsimha’ and became a dancing sensation with his first movie.

He introduced new dancing style which was loved by the youth.

Not many know that he also acted in the British miniseries based on the Novel-The Far Pavilions.

The movie that could have been India’s first Dance Movie:

Naved and Jaaved got together to make a film called ‘Dance Master’ in 1993.

They had hired Santosh Sivan- who is known for his work in ‘Roja’ and ‘Dil Se’ and many other movies as the Cinematographer and his brother Sangeeth Sivan who is known for movies like ‘Kya kool hai hum’ and ‘Yamla Pagla Deewana 2’as Director.

And they had even signed Anjali Jathar as the actress who was known for her roles in later movies like Trimurti, Madhosh and Dhaal.

The movie was shelved on account of delays in production due to the Mumbai Riots that took place between Dec 1992 and Jan 1993 and it impacted the overall planning and finance badly.

Boogie Woogie could have been on some other channel:

Naved, Jaaved and Ravi were contemplating on doing something together and they came up with the idea of Boogie Woogie in 1994.

There were many Singing Reality Shows but there was no Dance Reality show before Boogie Woogie.

Naved and Jaaved Jaaffery were leaving for United States of America for personal trip and while they were packing, Naved received a call from Sony Entertainment approximately an year after submitting the concept of Boogie Woogie and he was called for a meeting the next day.

He decided to stay back for the meeting and went with Ravi Behl and guess what, they were given their first cheque of Rs.14 lacs to start the production of Boogie Woogie and gave birth to ‘R & N TV Productions- a joint venture of Ravi and Naved.

While Jaaved was the Judge, Ravi and Naved took the Production into their hands and Naved Edited, Hosted and directed the entire Show.

Johnny Lever-an Indian Comedian Actor was once invited by Ravi Behl to Judge the Show.

Johnny bhai as Ravi addresses him agreed to be a part of the show in spite of his busy Schedule. The show was recorded and as per Ravi “it was one of the best Boogie Woogie Shows because of the laughter and entertainment Johnny Lever brought to the show”.

Twist :  The show was recorded and next day before it goes to editing Ravi receives a call from Naved saying “the Tapes are missing”. Ravi and Naved were in big fix as the Tapes were nowhere to be found.

After trying their best efforts, they realised that the Tapes are not going to be found.

Ravi thought for sometime what to do and then made a call to Johnny Bhai. According to Ravi, Johnny bhai guessed the issue before Ravi could really speak and agreed for a reshoot without charging a single penny.

The point to be highlighted here is that Johnny Lever was at the peak of his career during this shoot and producers were lined up to have him in every movie. In spite of such a busy schedule and demand, Johnny Lever came to Boogie Woogie and reshot the whole episode.

Season 1 was launched in 1996 which was hosted and directed by Naved Jaffery along with Kadambari Shantshri Desai. She was also seen in the movie ‘Stanley ka Dabba’ in 2011 as teacher.

Boogie Woogie is the first Dance show that has been franchised from India by any country. Nepal has taken the right to air the show.

According to Naved, he was only interested in Directing and producing the show. He hosted the first Season as they were not able to zero in on anyone who could do the job.

Naved never liked reading the script and so he decided that the anchors and judges would do the show extempore.

They were looking for a celebrity Anchor and then after the suggestion of Producers and team members Ravi joined the Naved to Anchor the show.

It was not a tried idea yet it worked wonders for Boogie Woogie as the Audience loved the chemistry of Ravi, Naved and Jaaved.

They had introduced a very casual ‘Takiya Kalaam’ segment which became a hit among the participant the TV viewers and everyone would wait the Trio to crack a ‘takiya kalaam’ the same during the episodes.

The Trio introduced a Mummy Special which became a super hit series.

After interviewing Ravi, Naved and Jaaved factinfact.com learnt that The Mummy Special is the Trio’s favourite among other ideas tried on the show.

The show would have dedicated Themes like the Daaku (Dacoit) Theme that Naved specified “was one of the most elaborate ones in which everyone on the set became Daaku and the participants had to actually perform a story before presenting the Dance on the stage”.  It was one of the most loved Themes on Boogie Woogie.

Ravi and Naved were such a ‘duo in demand’ that Sab TV came up with a show called ‘Paisa Vasool’ that both of them hosted. They invited stars of yesteryears which was their forte based on the experience of calling them on Boogie Woogie.

Ravi, Naved and Jaaved-the famous Dance Trio got together to give a new show to the world in 2005 called Kaboom-Duniya Hila De, the show was judged by Jaaved Jaaferi and Indian Dance sensation Prabhudeva. It was aired on Star Plus between 2005 and 2006.

Ravi specially highlighted and remembers an Episode in which they has called Mehmood and they did not cut the shoot in between because of the old days Bollywood stories that Mehmood bhai telling was mesmerizing. They had to struggle a lot during the edit to cut it to a 22 minutes episode.

Ravi and Naved fondly remember Tabassum as the Judge who has been a regular on the show and would steal the mike from everyone. Ravi, Naved and Jaaved put this lightly that she would give us the time to relax. She would take over the job of Host and Judge at the same time.

Effects and shooting style that never existed on Indian Television:

The show was the first Dance Reality show of India which had a lot of Sound Effects that made the audience laugh and enjoy it throughout.

The Madness of the Trio Ravi-Naved-Jaaved was hilarious and audience would demand them to repeat the jokes, Takiya Kalaam and the overall madness.

Many a times Ravi & Naved would do some Madness on the roads of Delhi or some other city of India while Jaaved would on the show Judging and Hosting and taking them on air via satellite. This was never done before on Indian Television for a Reality Show.